Do latchlocks only work connecting panels in plane? Or is it possible to also connect panels at an angle?

Most latches are designed so that they work with panels that are in plane.
However for some applications there is the requirement to hook at an angle.

Everything has to do with the pivot point that needs to be reached.

So the latch would have to be different, as you see on below drawing the centre of the pin is higher than the imaginary line between the hook gripping pint and latch pin.

You can latch on curved surfaces though 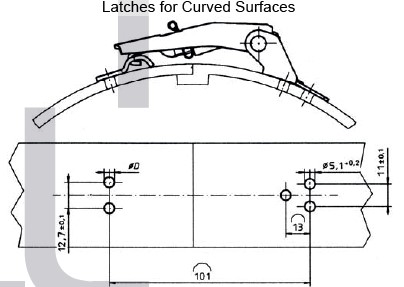 The way it is is designed is that the base of the latch is higher, making it easier to grip on a curved surface
One of the disadvantages, it that the radius is quite big, and the latches also

Another option is that you want to grip on a 90° angle
A more robust type of latch can be seen here:
https://anemo.eu/s-clamps/pav-series

it can be designed according to your wishes

Please contact our team of engineers at [email protected]

The principle is now clear to me, we need to be in plane or 90° for flat surfaces OR to have quite a large radius of curved surfaces (for tangential connection of the latter).

Technical Questions What is a LatchLock ? How to Select Your LatchLock ? What are the new Latches part numbers with Black Plating?